Mum is just sorting out her camera when Ginny arrives to meet her new sister.

” Hello ” say’s Ginny shyly ” my names Virginia but everyone calls me Ginny and this is Mossy my bear ”
“Hello” reply’s Ashley ” I’m Ashley and this is Gertie. You look very familiar? Have we met before? ”
“No , not that I can remember ?” 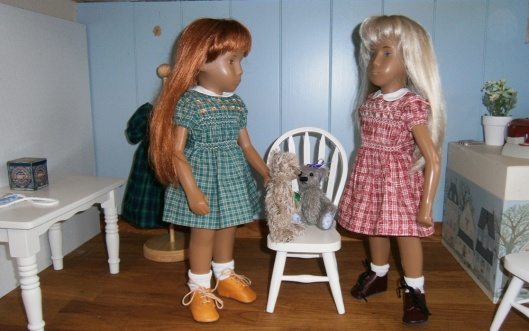 Ginny put’s Mossy down on the chair with Gertie while she chats to her new sister.

” Hello Bertie ” says Mossy ” It’s nice to have another lad in the house”
” My names Gertie NOT Bertie and I am a girl not a ‘lad’ Look ” she says pointing to her purple ribbon ” Do boy bear’s in this house wear ribbons?” another black mark for her new home….
” Sorry ” says Mossy ” I did not notice the ribbon ”
“And what’s that thing round your neck? Are you some kind of mystic bear?” demands Gertie
Mossy looks bewildered ” What ‘s my stick? ” He looks around ” I don’t have no stick ” He’s beginning to think this new bear’s a bit dim!
” Not Stick! ” cries Gertie ” Mystic, magic…are you tuppence short of a shilling? ” she asks not at all surprised if he is in this strange new household. 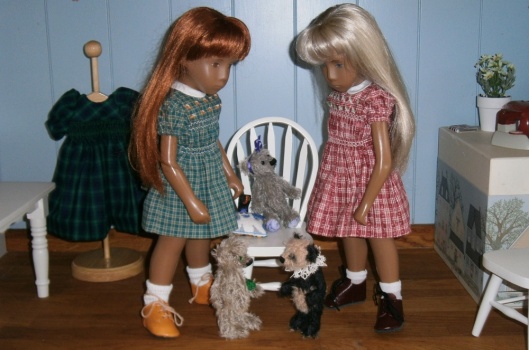 Feeling insulted Mossy gets down from the chair as Edward arrives to help settle the newbie’s in.
” That bear Gertie’s a strange one ” he confides to Edward.
Gertie looks at Ashley ” I am sure there’s a train we could get! We don’t need to stay here” 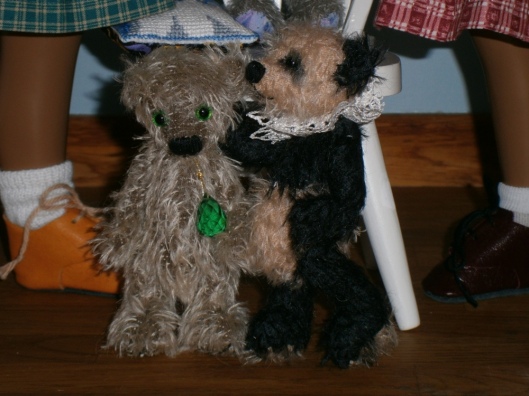 “Come along ” says Edward soothingly ” Let’s get the photo’s out the way and then we can clear up any mistakes”
Mossy looks sad ” I was just being friendly and she accused me of having a STICK! Did she think I was going to beat her! ” he asks appalled ” What sort of place as she been living in where they beat bears!”

” Come along” sigh’s Edward ” I’ll explain it all ” he take’s Mossy away over to the side. 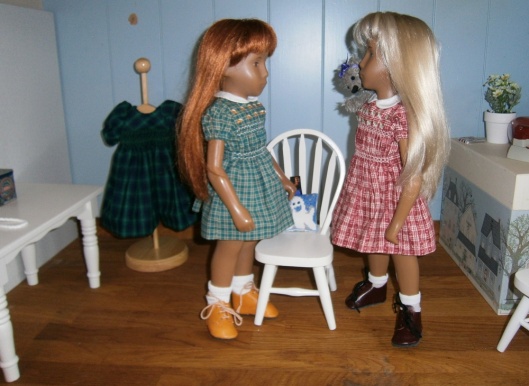 Gertie’s climbed back on Ashley’s shoulder ” It’s ok Gertie ”
” We should leave now ” worry’s the little bear anxiously ” Who know’s what nutter will turn up next! ”
Ginny giggles.
” I like it here ” say’s Ashley, smiling at Ginny ” I think we should stay awhile ”

Ashley settles Gertie back on the chair so mum can take a few photo’s of her with her new sister.
” Now just wait there a moment ” says Ashley
Grumbling the little bear sits down.

The girl’s pose for their pictures.
A voice from the chair can be heard mumbling ” Have the lights gone again! “

” I’m going to go blind ” Gertie continues to grumble ” with these lights keep flashing on and off and on and off!!”

Mum bring’s Gertie and her chair in for final photo.

” They are nearly finished ” State’s Edward ” We’ll get Gertrude settled in and she’ll feel better ”
” Her names Gert RUDE ! ” says Mossy ” That explain’s it, she is one Rude bear!”
” She is just afraid ” Edward say’s ” It’s all strange and new and she need’s to get to know us, then she’ll be fine”
Mossy thinks for a moment ” She said I was tuppence short of a shilling!”
Edward tries not to smile ” Did she now”
” Yes the cheek!”
“Yes”
It’s quiet for a while but Edward can hear Mossy’s brain working…” Edward? ..what’s a shilling?……and why’s it tuppence short?……and anyway what’s a tuppence?…..”…………….