Storm’s been out in the garden taking Diggory and Mossy for a ride in the pram, much to Mossy’s disgust! She hear’s someone calling her and stops to wait for them to catch up. It’s Callie. 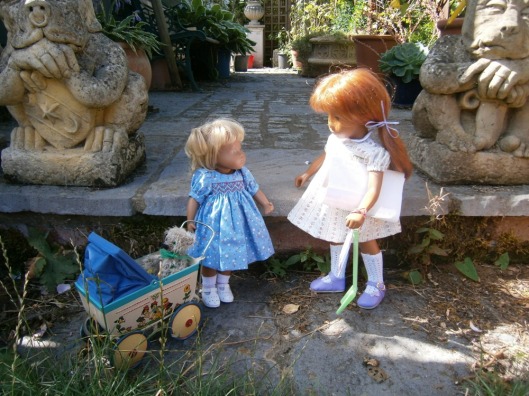 ” Hello Callie ” smiles Storm ” I’m taking Diggory and Mossy for a ride round the garden they love it” Mossy mutters ” Oh no I do not!” “What’s the matter lad!” says Diggory ” It’s bracing to be out in the fresh air!”

” A parcel came for you and Mum sent me with the letter and what was inside”
“Ooo !” sigh’s Storm getting excited. 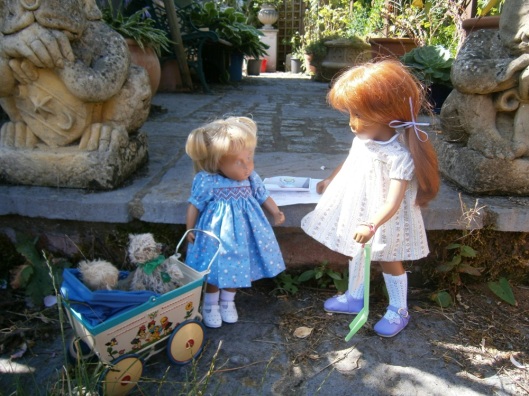 Callie puts the letter down for a minute and  Mossy see’s a chance to escape!

Callie show’s Storm a photo that came with the letter.
Mossy starts to slide quietly over the side of the pram towards the ground .
” You off somewhere lad? ” asks Diggory making Mossy jump and start shushing him!

Here is the photo. 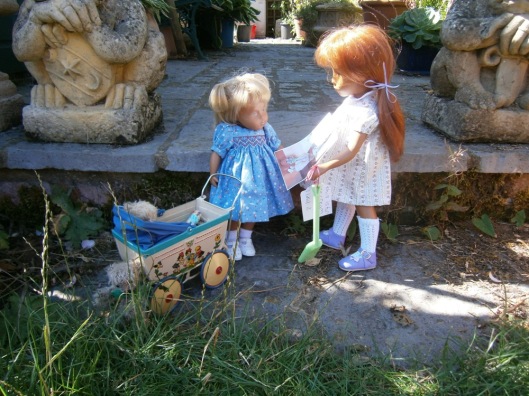 Mossy’s made it safely to the ground, Storm still unaware that he’s escaped!

Here is the letter , It’s from Lora saying that she’s sent Storm a shovel to help Mum and Dad with the garden and it will stop Lonely trying to ‘help’ out there!!
Ps How is Mr Mossy? we are big fans at the cottage!!

Callie gives Storm a pretty green shovel, while she is admiring it, Mossy who was trying to get away appears to be busy trying to read the letter Lora sent!

“Never mind that old Shovel ! ” says Mossy loudly ” Where does it say WE are BIG fan’s of MR…did you hear that MR MOSSY!” 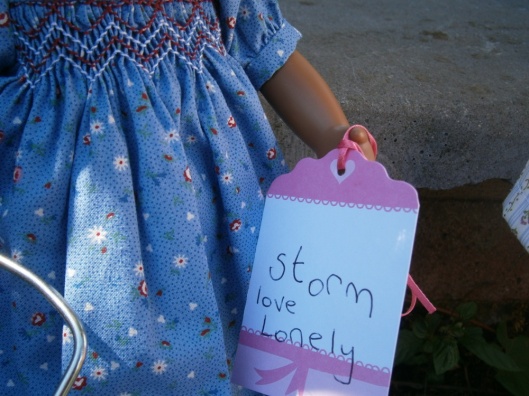 Storm looks at the tag attached to the shovel, it’s from my good friend Lonely, who is now safe from the Ice Queen !

She reads Lonely’s message with help from Callie ! Oh it’s for Ice Cream Yum yum,” says Storm  , Callie replies ” Lets go and see if Mum will give us some Ice cream so you can try it out!”
Storm thinks that’s a great idea.
She puts her lovely new ice cream shovel in the pram and before he knows what’s happening , Mossy finds himself back where he started! 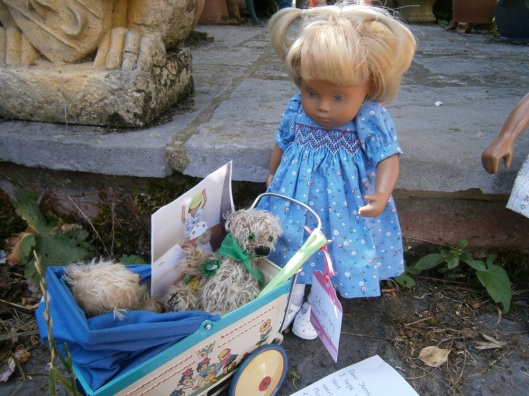 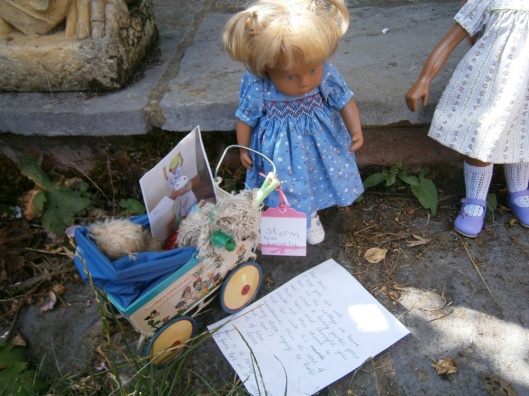 Storm is just about to move off when Mossy cries “NO! ” leaning over the side he points at the letter from Lora ” MY FAN MAIL ! I want it!”

Callie rolls it up and put’s it beside Mossy, who cuddles against it lovingly.
“What’s that you have there? ” ask’s Diggory

” It’s from MY fan Lora in the cottage !” says Mossy smugly ” No one else in this village has a Fan letter! I must show Edward ! ” smiling happily he settles down to hugging the letter all the way back to the house , where he can be heard calling ” Edward! Edward ! It’s me MR Mossy !”