A few of the CLAN went to spend the night a their big big big sister Lauren’s house so this morning Lucas decided to help with feeding her pets.

He is allowed to carry the fish food.

Roy shakes in the food while Lucas looks on. 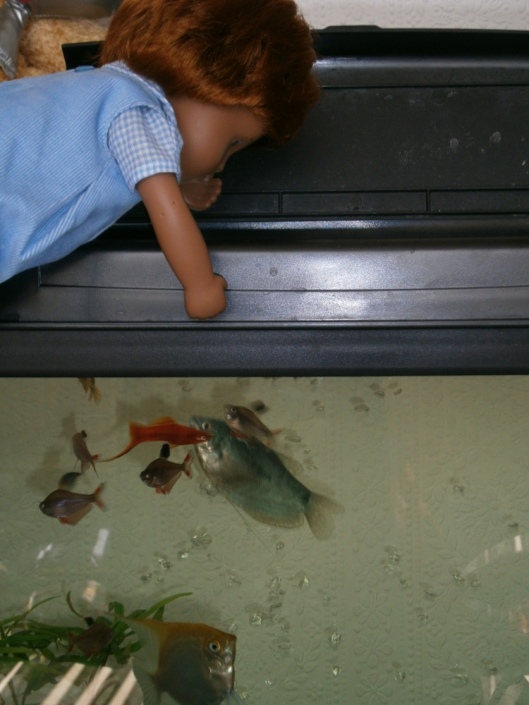 Lucas shouts at the fish to come and get their dinner!! Which the fish do but I don’t think Lucas shouting made them arrive!!Later everyone is busy around the house when Lucas finds a very interesting tank……

” Wow! ” sighs Lucas looking at the bearded Dragon in his Vivarium ” A Dragon! ” he stands watching the dragon for a while until…

he is joined by Mossy ” What are you looking at ? ” asks Mossy unable to see past the rocks at the front of the glass.Lucas smiles……..

He takes Mossy to the other end of the glass but there are some plants in the way so Mossy still cannot see” Are you sure you cannot see? ” questions Lucas smiling” Nope !” replies Mossy getting on the tips of his paws ” Not a thing !”

Lucas slides the glass door , a small gap appears into which Mossy puts his head ” What about now? ” asks Lucas gleefully” Nope!” says Mossy ” What is it? “” I think it’s a bears play ground ” Lucas says softly“Really!” gasps Mossy ” Let me look 1″

Lucas gives Mossy a boost into the Vivarium , Mossy is so busy looking at the rocks and plants around him he does not see a very interested spectator watching from under a nearby large rock.

Suddenly Lucas slides the door shut and starts walking away !Mossy taps on the glass ” Lucas Lucas !” he calls  ” You have to open the door for me! Lucas !”but Lucas just walks away humming a little tune happily.

The bearded Dragon watches the little grey furry thing tapping on the glass and shouting, he looks a little big for lunch but maybe it’s something new? 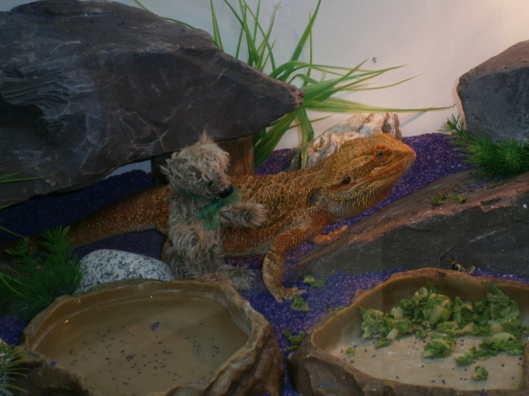 Mossy decides to see if there is another way out and wanders round the rocks until he comes to one that appears to have an EYE!! He freezes , his little heart pounding so loud he is sure the creature will hear it and gobble him up.The Bearded Dragon decides to play it cool and pretend he’s not seen the furry thing and looks off into the distance.

Seeing a chance to save himself he rushes up onto the rock above the creature and lays down!The Dragon looks back to find the furry one’s disappeared! So he wanders off in search of it!Mossy uses this as he opportunity to get back to where he came in.

Just as he stands frozen against the glass Hattie comes into view. She sees Mossy immediately ” Mossy Green what are you doing in there!” she asks heading towards him

Hattie slides open the door speaking to the terrified Mossy in a calm and gentle voice while Mossy babbles away in gibberish!Reaching in Hattie quickly lifts Mossy out and onto her shoulder just as the Dragon sees them.The Dragon is somewhat put out that that little person appears to be taking his lunch ! But he was not too sure about that furry skin and he would definitely been more than one mouthful!! 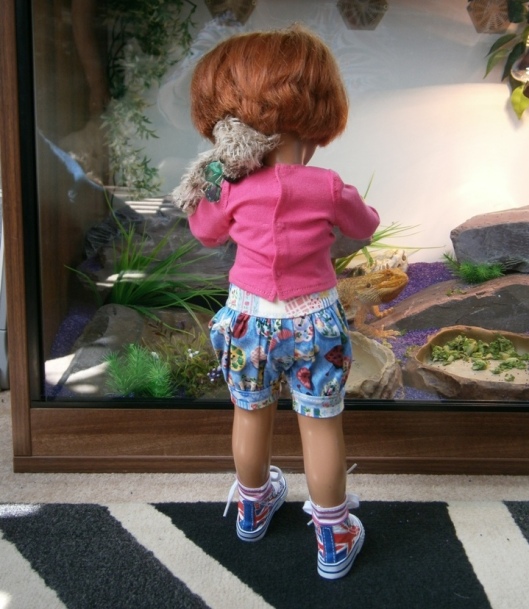 Mossy clings to Hattie with the grip of a bear that’s seen his end coming…Hattie coos to him gently while she shuts the door firmly on the Dragon.Gently she asks ” How did you get stuck in there Mossy ? “Mossy who is slowing giving in to the relief of his rescue just manages one word before he closes his eyes to sleep. 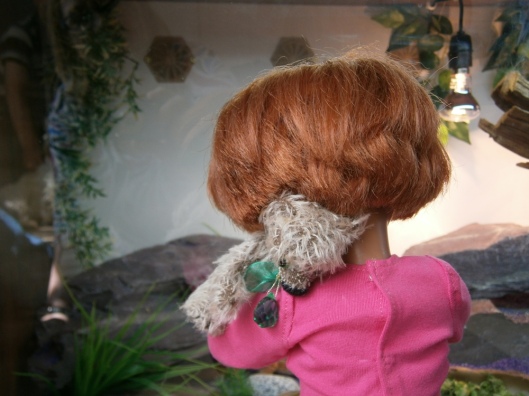