It happens every year! Well it does in this house! After everything is packed away and put back up in the loft so it decides to make it’s self known!

I’m sure you have all guessed what I am talking about by now and you are correct! There is always ONE Christmas decoration left lying about!

This years is one of the baubles from the Christmas tree! We packed, or so we thought, all the decorations from the tree away and put them in the loft.But left the tree up to put away the next day, which is when we found the green Bauble!
Bobbie is studying it as she likes the colour!.

Bobbie says she’ll look after it until the next Christmas arrives but I am not sure! I may get Paul to get the box back down and tuck it away in case it gets broken after all eleven months is a long time.

Poor Bobbie is finally getting some attention! She’s been in the clothes she was changed into since she arrived but now she’s had a change of clothes and joined the family downstairs. 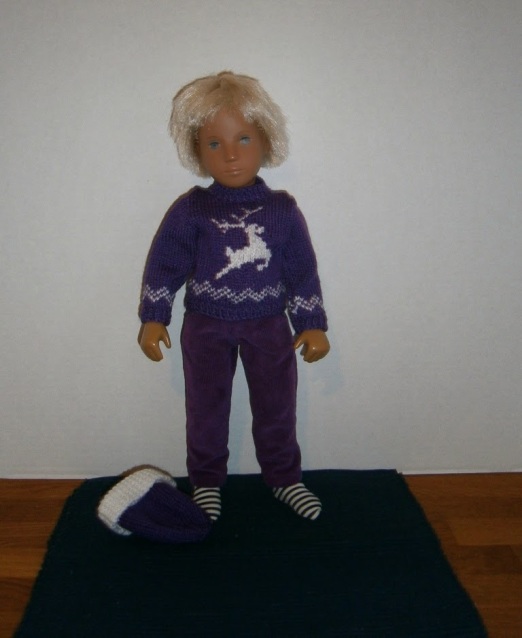 The other day when I saw sorting out the boys clothing I was left with a beautiful pair of purple cords by Ginny ( A Passion for Sasha, on etsy ) and I left them to one side to put on one of the girls.
Then I was up trying to sort out some things to sell that I never use for the dolls when I came across this lovely purple winter sweater and hat set Gill made for me one Christmas.
I thought it would be a good match with the trousers, so brought it downstairs and that’s where they both, trousers and sweater set stayed until today, when I finally decided that Bobbie would look nice in these, so went and found the poor child.

The funny thing is that I thought she’d been called Bobbie but could not be 100% sure so had to look back through the blog for her arrival and check the name, I was pleased to find I was correct as if I forget their names they tend to land up on the adoption market!!

I had forgotten what lovely eyes she has, bad mother that I am, but now she’s down with all the others and getting comfy. I may do something with her hair later in the year or I may not but if I did re root her, I would chop her hair quite short again it would just be in a better condition.But for now I love her tatty head ! Maybe I should have called her Tatiana ?? missed a chance there….or I could change her name……..