Mossy had been leading Edward round the house with dire warnings of Doom! His emerald had been glowing a deep green for the last half hour and he’d been moaning and groaning so much finally Edward had agreed to help him find the cause!

“Who are you?” inquires Edward of the strange bear sitting on the children’s room sofa
“It’s her It’s her! ” says Mossy shaking ” She’s the one making my emerald talk to me!”

” You have  a talking emerald? ” repeats the little bear thoughtfully ” may I touch it ? ” 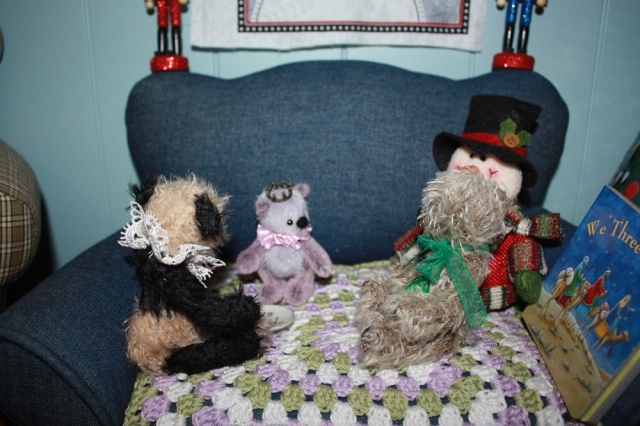 ” Over my dead body !” States Mossy
“Is that a wish dear?” asks the little bear slyly
“Behave!” says Edward sternly ” you know full well that was a figure of speech !” 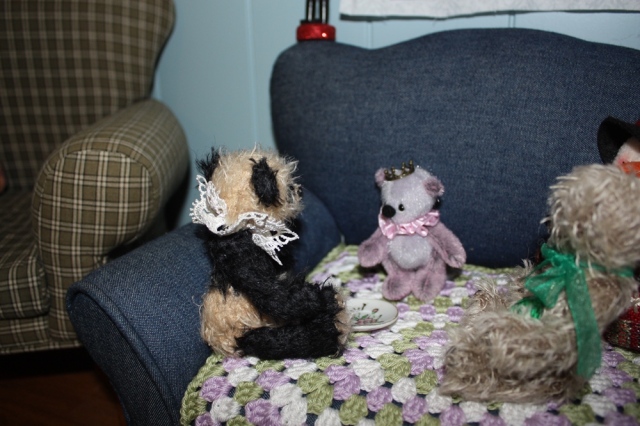 ” If you say so deary !”  says the little bear looking Edward over
“Queen Petal I believe ” says Edward formally “to what do we owe this … disturbance ”
The Queen sizes up the Panda sitting before her and decides he would be a formidable foe, so she turns on the charm.
“Well young Panda it would appear you know who I am but I not you? ”
“I’m Edward ” growls Edward ” and not as young as you’d like to believe  madam ”

“Queen Petal? ” demands Mossy ” What’s a queen bear doing here? ”
” I am just trying to ascertain that Mossy, kindly don’t interrupt please”
“But ” says Mossy interrupting ” How do you know who she is? ”
Sighing, Edward realises he’s going to have to tell Mossy or he’ll never be quiet . ” She is a bearkin bear, one of the fairy bears , Queen Petal here deals with peoples wishes ”

About to turn back to the bearkin Edward is again interrupted by Mossy ” So if I wanted a wish granted she’d make it happen.

” Her wishes can be counter productive ” says Edward ” You never know if the wish will turn out just as you asked or have a nasty twist in the tail ”
“They have Tails! ” says Mossy in an amazed voice, Edward wonders just how bad he’d been in a former life to deserve this life before him!
“No they do not have tails”
” But you said ”
“I did not.. well I did but not how you think ”
“Tails… you… said.. ” says Mossy
Edwards about to shout when he realises that somethings missing….

He’s just reached fifteen, having decide twenty was more like to stop in shouting at Mossy, when Ben comes into the room.
“Hi Edward, Mossy . Have you seen Lucas? ”
“No” they say together ” Why? ” asks Mossy
” I just wanted to give him his book, he was reading this morning and I just found it in the hall ”

Ben approaches the sofa and leans over ” I’ll leave it here for him, it’s a little chilly to touch, someone had left the front door wide open and it’s quite cold tonight”

Ben turns to leave calling back that they are about to watch a Christmas dvd , if they want to come see. But Edward’s silent , while Mossy says he’ll be along in a moment.

Edward stares at the book, Ben’s placed against the back of the sofa, seeing Edward studying the book Mossy decides he’d best study it to ! Mmm It’s very.. yellow and sort of square .ish. getting fed up of Edwards silent he’s about to talk when… 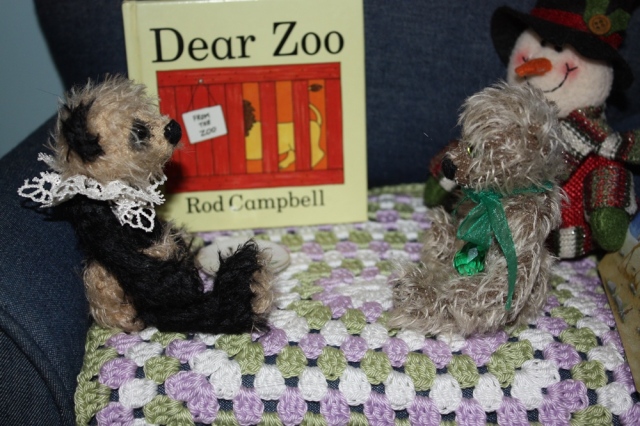 Edward turns and looks at Mossy worriedly ” he wouldn’t would he? ”
Totally oblivious of what Edwards rattling on about he takes a stab in the dark ” Wel l l l  he might ”
Edward closes he’s eyes, his face going a slightly greenish colour…Mossy’s fascinated.. how did he do that? I wonder if I could go a green colour?… just about to ask…

Edward starts to scrabble off the sofa, so Mossy follows suit ” That boy will be the death of me!” growls Edward ” if he does this they’ll lock him away , after Mrs Mum’s tanned his hide ! ”

“Done what? ” puffs Mossy sliding off the sofa “What’s he done now!”
“Never you mind, just follow me I may need some help…. have you ever seen a …lion.. ” Their voices fade as they hurry out.. the sound of the front door slamming a few minutes later.